Video conferencing can be frustrating as hell. Minimize the frustrations by preparing ahead of time and reframe your mindset to see the bigger picture.
You’re already running a few minutes late to the video meeting.

Your patience is running thin.

You can’t stand it anymore.

So, you try closing the application, but now all of a sudden, your computer is frozen. It isn’t responding to any of your mouse or keyboard inputs.

You’re forced to do a hard reboot and you end up having to login and go through the entire process again.

You finally join the video call and it’s complete chaos.

The presenter is having problems with sharing their screen.

And it gets worse with the additional cross-talking with really bad echo. Your head is starting to buzz and now you’re looking for a quick remedy for your tension headache.

The actual meeting didn’t even start until 20 minutes after the scheduled time. This whole thing is a train wreck. It’s become another stupid meeting you should’ve avoided.

Welcome to the world of work from home video conferencing.

Video conferencing technology grew in popularity back in the early 90’s with TVs hooked up to dedicated computers accessing telephone lines.

And while this was a huge leap in communications tech, it still wasn’t pretty. The video was choppy and low resolution. It was like watching animated GIFs, only on a much larger screen.

Fast-forward to today, and despite all the advances in technology and internet bandwidth, video conferencing is still a pain in the ass.

Sometimes when it gets really bad, you wish you could just secretly outsource that job task.

Here are the top most annoying things about video conferencing, specifically when you’re working from home.

When video conferencing was just starting to take hold in the 1990’s, there was a lot of effort in trying to reduce the size of the video data files because high-speed connections didn’t exist. All sorts of different “codecs” for compressing the data came out and they helped to some degree.

Today, compression techniques are still in use. However, video calls are still big bandwidth hogs that...

Every week, you’d get a CD promo mailer for 500 hours of free unlimited internet access at a blazing speed of 56 Kbps using your phone line at home.

VIDEO: Sound of Dial-Up Internet
YOUTUBE: willterminus
LENGTH: 00:28
The worst part was when someone in the house picked up the phone to make a call, it would disconnect your dial-up access.

“Get off the internet! I have to make a phone call!”

Today, everyone’s got high-speed internet wired into their homes. But instead of paying $9.95 per month, it’s closer to and sometimes over $100 per month, a pricey annoyance for sure.

And, as video resolution continues to increase, so will the need for more bandwidth. It’s a never-ending need for more.

3) Shitty Experience Due To Lag

Despite having high-speed internet access, the whole experience of video conferencing is still pretty shitty.

The video often lags behind the audio and you get that weird out of sync situation where the person’s lips don’t match up with the talking.

On really bad connections, the video will just freeze up or become real herky-jerky. It’s like you’re watching re-runs of Max Headroom all over again. If you’re a child of the 80’s, you might remember that little gem.

Nobody’s got a professional video studio at home. And, that’s okay. Nobody expects that.

However, there’s usually that one participant that always has some kind of bullshit nonsense happening in the background. It’s the kids fighting, someone cooking in the kitchen, random people walking by, etc.

It’s just enough to visually distract you and take your attention off course.

5) People Who Forget To Fucking Mute

There’s always at least one person, sometimes even two or three people, that forgets to mute their damn microphone.

You’ll hear keyboard typing, side conversations about what’s for lunch or dinner, TV in the background, dogs barking, etc. It’s all the random daily house activities.

It’s all a normal part of life, but it’s annoying as fuck for others on the call that are trying to listen in on the presentation. It’s like having to deal with office noise all over again but only time at home.

When you have a group video call presentation, the odds of something not going right is pretty high. Whether it’s on the host presenter side or on your side, when video is involved, there’s a greater chance of something not working.

It’s things like the video cutting out, audio is garbled or echoey, pixelated images, screen share function not working, etc. There are so many more things that can and will go wrong.

In larger group video calls, you’ll notice that there’s less interaction going on. It’s like everyone is the new kid in class and nobody wants to speak up.

Group conversations in real life have the benefit of seeing everyone’s body language and their intention to speak or ask a question. However, in video calls, that visual cue is less obvious.

What ends up happening is people end up simultaneously talking over each other at exactly the same moment. And, trying to listen to and understand two people talking at the same time is impossible.

Having back-to-back or multiple video calls on a daily basis really drains your energy big time. You feel like you just took a final exam - just drained of mental energy.

At least with audio-only calls, you can do other stuff like email, cyberloaf or even take the call as a walking conference call outside for some fresh air.

But with video calls, you’re chained to your desk and you’ve gotta stay on your toes and look the part. This takes more energy and effort.

It’s time to change outta those shorts or PJs and look presentable. You can’t and shouldn’t join video calls looking like a hobo. Dress codes still matter on video calls.

So, as comfortable as you are in your fav home loungewear, you’ve gotta make yourself somewhat presentable on video calls.

As much as video conference calls can be a royal pain in the ass, they do have their merits and can be an efficient way to share information and communicate.

But, they’re still mired with a ton of niggling issues and annoyances.

You can’t solve all the problems but you can minimize the impact of some of them. And, any little bit of progress in making your workday a smoother one will help you get through rough days at work with far more ease.

As mentioned earlier, video calls are big bandwidth hogs. And when it’s a video group call, the bandwidth requirements are even higher.

On average, a group video call requires about 10 Mbps of bandwidth. And, that’s just the video application itself. This doesn’t count all the other programs or people accessing the web from your house.

So, if you’ve got kids or roomies that are also using the internet connection for things like online classes, gaming, Netflix, YouTube, etc., you need to step up your service plan.

Go to fast.com to check your current internet connection speeds.

Ask your boss or the HR department if the company has any policy for home office expense reimbursement. Your upgraded internet connection may qualify for it.

If your work laptop is more than three years old, it’s on the cusp of being too outdated performance-wise to keep up with all the heavy applications and use. It’s getting laggy and bogs down often.

Check with your IT department and see if there is a way for you to upgrade your laptop to a new one. A new laptop will have a faster processor, more memory, better battery life, etc.

It’s like going from a 10-year-old shitbox on wheels to a brand new sports car. The speed and snappiness of the new laptop will make you feel like a productivity superhero.

Close All Other Programs During Video Calls

If you can’t get a new laptop, then your only option to make things better is to put fewer demands on the laptop’s processor.

So, as much as you like to multitask with email, browse the web, work on excel or powerpoint, etc. during the video call, don’t do it ‘cause it just makes things harder for your laptop.

Instead, close out all other programs and just run the video conference and be present on the call for a change. Focus and monotask during the call and you’ll get more out of it.

Do you really need to see your coworkers in high-definition video?

Probably not. In fact, in some cases, definitely not. 😉

The same goes for seeing the presentation. In fact, viewing a typical Powerpoint deck in standard vs high-def doesn’t make any difference.

So, to make things operate more smoothly with less hiccups, set your video conference quality to standard definition. This will reduce the bandwidth demand but still maintain enough quality to see everything well.

Login And Get Set-up Early

This is especially important when you're the host or presenting. You don’t want to try getting things set-up just before the start time - that’s a surefire way to ensure problems and more stress for yourself.

Login and get set up 15 minutes before the session begins. This will leave you with enough time to sort out any technical issues before the rest of the group joins.

This takes the stress out of web conferencing.

When you’re attending a video meeting, log-in a few minutes beforehand and pre-test your microphone and camera to make sure that it’s set up correctly.

Sometimes, the simplest and low-tech solutions work best. When video conferencing issues become too unbearable, you should revert back to the easiest, lowest common denominator - a phone conference call.

There are no problems with software, app conflicts, low bandwidth, etc. Everyone is just using their phone to make a call.

This simplified format works every time and the bonus is that everyone gets the presentation too - ‘cause they all ask for it anyways. 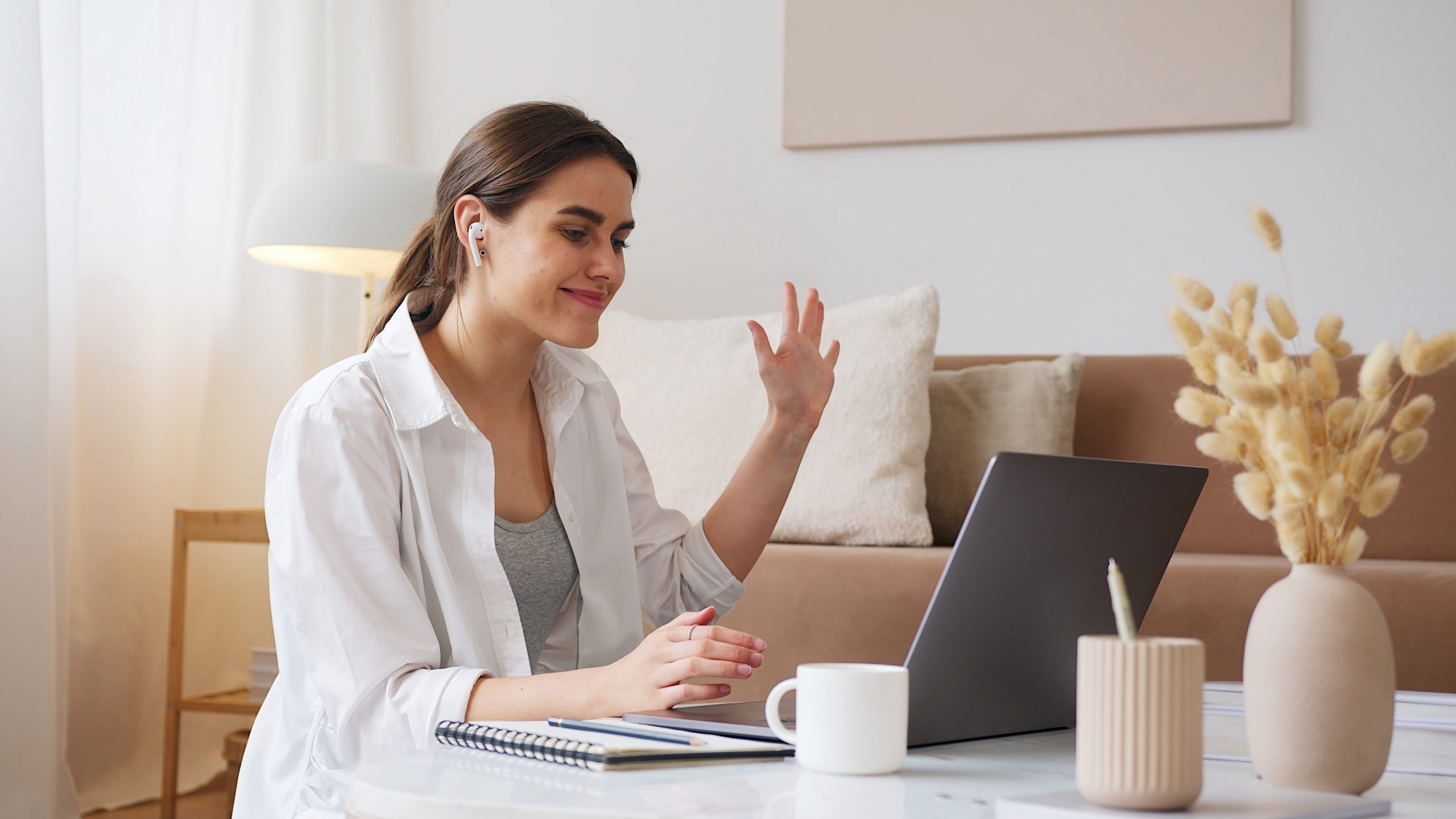 Because, it could be far worse - like not having a job at all, right?

You always need to look at the bigger picture and see the positives. After all, creating positivity when work sucks is the secret to getting through rough days.

Not every video call will go smoothly. In fact, most probably won’t. There’s almost always a glitch or some annoyance that happens. It’s part of the deal and getting all pissed off about it won’t make it better.

It’s out of your control. And, trying to control something you can’t is only going to stress you out. So, let that shit go.

What you can control is your attitude and perspective to it all. And, when you master that, you can survive any video meeting no matter how far off the rails it goes.

​​​​​Make Your Weekends Feel Longer With This Strategy

​​​​​WFH: Do Walking Conference Calls Instead Of Sitting On Your Ass